Sounds of the Season

It's that time of year. The biggest holidays are coming up soon, and we'd like to give the gift of holiday food pronunciation. When you're at the dinner table for Thanksgiving, how will you ask for piece of pecan pie? We created a pecan polling question equipped with sound to find that out. We came up with five potential pronunciations for the festive nut. We like to think we have all of our bases covered, but feel free to let us know if you pronounce it a different way.
Another food that makes its way into holiday desserts is caramel. Gooey burnt sugar seems to make everything better. With that said, the pronunciation of caramel can stir up quite the debate at the dinner table. There doesn't seem to be a consensus on which syllables to use, and what number of syllables there ought to be (generally 2 or 3). Give us your take in the caramel poll, and make sure to point at family members and laugh whenever they fail to conform to your pronunciation ;)
If you want to share our vocabulary questions with visitors to your own blog or website, get our City Dictionary poll widget, which is bundles of fun brought to you free of charge :)
Posted by City Dictionary at 2:17 PM No comments:

And the spooky city is... 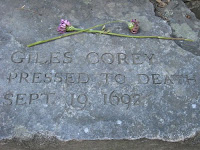 Congratulations to ebrenner for winning the City Dictionary "Spooky City" Contest. Her More weight entry exemplified the spookiness that defines Salem, Massachusetts. The poor Giles Corey, accused of being a warlock, refused to enter a plea so he could be tried for his alleged crime. He was subsequently "tortured by the authorities, who laid a heavy board on top of him and placed large stones on the board." Every time his torturers asked for a plea, "more weight" was the only response he would give. He eventually was crushed by the sheer weight of the stones. Pretty spooky, huh?
Of course, Salem is no stranger to spookiness. The Salem Witch Trials (Wikipedia) are an infamous part of US history. Salem is known as the "Witch City", which is also an entry authored by ebrenner.
Again, thanks and congratulations to ebrenner!
Posted by City Dictionary at 9:38 AM No comments:

City Dictionary: Word of the Day

City Dictionary in the News